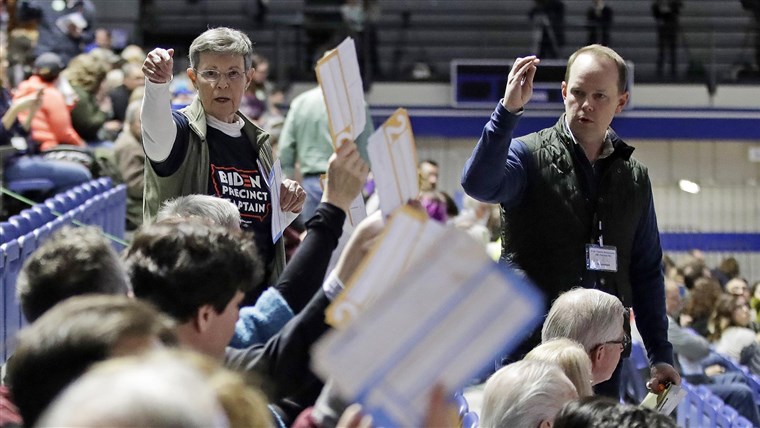 While the results from the primary in Iowa are already dragged down and dubious because of a “coding issue” in the reporting system, I’m thinking of this family guy, a white bold smily man from Georgia, a skeptic when it comes to elections who posed two years ago with his youngest daughter (he has four), a proud Girl Scout. She was wearing a pantsuit and a tie, and he put on a kilt-like black skirt, a blue shirt and a tie as well. The mother, Leah, a 38 year-old nurse, wrote as a comment: “My little family, fighting gender stereotypes, one Girl Scouts father-daughter dance at a time”. Her husband is a hardcore constitutionalist – the less government or authority, the better – “to the point of almost being an anarchist”, Leah says. She, on the contrary, was a big supporter of Hillary Clinton at the time, but “even back when she was First Lady”. I guess today, both have reasons to be skeptical towards the electoral system, which seems fragile, if not broken.

Leah’s family is not a cliché of any kind, it’s just a “regular” suburbian family, with each member defending simple human values while dealing with political differences in their own home, town, State, and country…

In the midst of today’s technical confusion, I think of them, as citizens. I know the candidates are those in the spotlight. But the citizens are no less important, they are the ones that ultimately matter, the ones any elected official is supposed to serve, to act in the name of : citizens are the source of the system’s legitimacy. And like Leah’s husband, most of them would rather do something else with their money than paying for corrupt, useless politicians. So when the system crashes, when the voting machines are stealing the show, it’s people who are eventually crushed and at risk of being betrayed and wronged.

There are so many ways the machine can trick them : it can be hacked, it can malfunction, voters can be personally targetted by data capitalists to the benefit of paying lobbyists, they can simply be ignored by the media or social media (being made invisible is a real problem), or they can be manipulated by them.

Since Trump’s election, Leah’s strategy is avoidance. “I don’t watch the annual State of the Union speech, which is today, I didn’t watch the impeachment hearing, I don’t follow him on Twitter, I don’t even use Twitter”, she says.

A lot of people are not on Twitter. A lot of people are critical of what screens and computers do to them and to their votes, even if they’re not those we listen. And if there’s a lesson from the Iowa mess, it’s to never blindly trust machines more than people. The citizens, not any other force, are the guardians of their own destiny, and this ideal is especially strongly worded in the California Constitution, one of the most “pro-citizen” in the world :

“All political power is inherent in the people. Government is instituted for their protection, security, and benefit, and they have the right to alter or reform it when the public good may require”.

In her State, Leah says the authorities went back to offer ballot papers instead of using machines last year, during local elections in November, after “so many years of problems”.

That’s probably a safe bet, even though there isn’t any perfect solution. But it seems at this point that the machines have acquired more power than the people : they can modify the whole result of an election and change the course of history. That’s a scenario that might have happened lately, and that might happen in the future. In politics, as well, the machines have become a trap for the humans that they are supposed to help. For some people I talk to, it raises the question : is it even worth going to vote, will my vote count or be just one lost message in a system nobody really understands anymore ? In a digital time, is a voter merely the potential victim of a hacker, foreign or national, or of a technical bug ? Is the system itself even working, before wondering about the candidates ?

To go back to the Georgia family, this time Leah supports Indiana’s Pete Buttigieg, for his eloquence, his military experience, a certain feeling of international credit he could restore. He’s the one to watch, the little outsider who might break through. As a second choice, if he steps down, she would go with Massachusetts’ Elizabeth Warren.

“I really like her, but I’m afraid she would alienate people who are in fear of socialism”, she specifies. Leah’s husband ? He is “disgusted by Trump”, she says, but the idea of more government… Hard to swallow.

Another fear coming from a machine that dysfunctions is the electoral college, that threatens to overturn the popular vote again. It happened in 2016 to an unprecedented extent (with a gap of the size of a city bigger than Chicago, the third in population in the US). Since nothing has been done to fix it, that’s another systemic problem for the people’s self-determination (and that’s a problem for any minority president, not just this one).

Overall, as a result of this inversion of the machine/humans relation, many people feel they don’t count, they stop “believing” in the system. In Los Angeles, for all the reasons mentioned above, it is especially true among black people these days.

I went recently to Inglewood, a largely African-American community, where I met the screenwriter of ’12 Years a Slave’… People there have to suffer someone like Trump in their flesh, as a reminiscence of the Klan in a place where it was active a century ago. A place where more than 90% of the folks voted for Hillary Clinton. If Trump is the minority’s president, in Inglewood, he’s the president of almost no one. That’s violent, but that’s the game, if the game is played fairly.

This is the real deep question. I don’t see how the people’s vote could be safer or more respected this time. With computer issues and the whole system’s obsolescence, not even mentioning foreign or private companies intrusions, it seems it will be by chance if the majority’s will and the person elected coincides. And afterwards, if things turn chaotic, will we blame “the people” ?

In the end, we’ll see whether reality is mirrored or stifled by, let’s say, the “matrix”.

*Update, Feb 5th : Pete Buttigieg, “Mayor Pete” like Leah calls him, took the lead in the initial results in Iowa.

(Bonus : The Matrix soundtrack, by Rage Against The Machine)