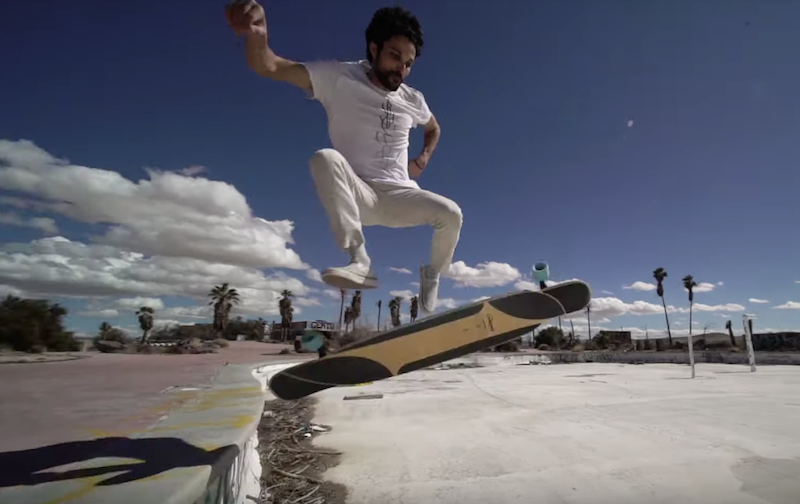 The soft power diplomacy of L.A. is not limited to movies and Hollywood. It’s been several years if not decades that it exports its whole lifestyle and culture, for better or for worse, filling the spiritual void left by World War II (especially in Europe). On the “better side”, L.A. has specialized in exporting immaterial pleasures. Of course the supreme form of these, that spread like a new religion, was music. But it extended to other things, related to it in some ways.

You just have to look in the streets of many cities. On docksides, on the hills, and even on mountain roads, you will see more and more kids riding boards : skateboards or their longer cousin, longboards. And look at the speed at which people adopted electric two-wheel scooters dropped from California, putting local authorities and residents in the midst of a urban madness – and environmental issue – they don’t know how to solve yet. Soft power turning out to be a little hard. But people using those objects, whether as a means of transportation or as a pure passion, are not only kids…

Lotfi Lamaali, born in 1983 in Casablanca, Morocco, has become an official “ambassador” of this modern form of diplomacy, one that seems less serious than garden parties in embassies but which is, I believe, a real influential diplomatic mission, reaching deeper grounds in the making of peace “l’air de rien”.

After settling down in Paris about thirteen years ago, to study engineering, Lotfi has become one of the best riders of longboards. Being a fan of music as well, he is among the few originals who started dancing on their board, slowly but surely making it a global trend. Ask a philosopher like Nietzsche if this is a superficial topic.

“One must still have chaos in oneself to be able to give birth to a dancing star”, would answer the German thinker.

Dancing as a way to lift the soul, and become one “uber” version of oneself (interestingly, it is the name taken by another California company to sell car rides). To me, the Ubermensch philosophy is very strong in the Californian psyche, whether it hides beyond super heroes – DC Comics, which published Superman stories for example, is based in the valley behind the Hollywood hills -, Silicon Valley “god” figures, or it lies in practices like transcendental meditation and yoga, meant to augment oneself (and of course, the project to enhance humans by putting chips in their brain is the crazy caricature of it).

Lotfi isn’t superman though, he’s “just” a super longboard dancer, as well as an engineer in telecommunications. And for that reason, he was chosen to be an “ambassador” in France for the most prestigious brand of longboards, Loaded, based in Culver City, next to Venice Beach. Culver City was known in the 20th century to be the home of major entertainment studios like Metro-Goldwin-Mayor, now Sony Pictures. Less known is the creation of Loaded, on Virginia Avenue in 2000, at the turn of the new century.

Ten years later, “I went to L.A. for the holidays with a friend, and I contacted the two guys who really started longboard dancing, Adam Colton and Adam Stokowski, says Lotfi. They responded and invited me to go for a session with them. I also met the team manager of Loaded. They liked my style, so they offered me to become their ambassador in France. It’s been nine years now”.

Lotfi, a longboard world champion, does so with no contract. “It’s based on trust. With Loaded, of course there is a business side, but for them the mission is all about the human aspect. They wanted someone who can bring people together and grow the community”.

So when I ask him why grow that community, he just laughs : “because I love riding longboards !”

In other words, Lotfi doesn’t do it for the money (if that was the case, he chose the wrong sport). In his mind, he acts out of love for “a whole lifestyle” that, as a guitar player, he connects to music.

“I’m glad I’ve finished my studies when I started riding a longboard, in 2008, because it became quite omnipresent, it’s an all-consuming passion”, he says. Lotfi discovered his first board through a former girlfriend, and then just went to a spot in Paris near the Eiffel Tower, brought his six-string instrument, and finally got to hang out with a couple of riders who taught him how to ride.

Like in the cinema industry, longboard dancing is all about the motion, and the pictures. Being told about the two American Adams and their videos, he watched their dynamic and experimented new original moves while riding, for example how to do the cross-step trick.

“But there wasn’t really tricks (like in skateboarding), so I started launching the board up in the air and see what happens”, he recalls. What happened was that he improvized some moves like his “aerograb”, a sort of jump in the air while holding the board and making it turn. He filmed it and found it esthetically pleasing enough to repeat it and invent more moves. Step by step, cross-step by cross-step, he became a master at it and had lots of admirers. But that wasn’t enough, he felt like “using this popularity for something else, for people to enjoy too”.

After 2014, Lotfi went on a ride to make longboard a real thing in Paris, where it was more of just “a small sect”, he says with a smile. That year, he created with his friend Alex the “Docksession”, a grassroots movement turned association. A weekly rendez-vous, mixing music and longboarding, by the river. California sunsets can hardly be beaten, but sunsets by the Seine are pretty beautiful as well. So people came. “All kinds of people”. This success made them create docksessions abroad, from Japan to Canada, from Singapore to the United States. Call it the board diplomacy.

Attending one of those gatherings is something telling : I got a feeling of global interconnection, not knowing for a second if I was in L.A. or in France or elsewhere, but also an impression of getting away from virtual long-distance connections to go back to human local contacts. Also got the feeling of getting hurt after a miserable fall, part of the real life experience.

“You need that part where you fall, Lotfi thinks. You take a tumble, and you go on”. Otherwise, that would be too easy, right ? Riding sports are a metaphor for life. I often heard in my childhood : “You learn by falling down”.

To be true, Lotfi hasn’t taken so many tumbles when it comes to organizing longboard events. A year after the Docksession, its little team created the “Grosse Rando” (the Big Ride), making the most of the “day without a car”, decided by Paris mayor. This time, even more people came, riding in the city’s streets by the thousand. The experience went on every year, except in 2019… but only because this year, Lotfi had something else in mind, again.

I came across him last weekend at the first longboard competition in the French capital, the 360 Longboard Dancing Open, his latest idea to “grow the community” and make this artistic sport shine. It isn’t a competitive sport by nature, more something you do for the adrenaline and the feeling of freedom, perhaps that explains why creating a competitive event came last. But it was a successful step, according to a French amateur rider (see video below), who found it reached the level of the other international competition taking place in the Netherlands, called So You Can Longboard Dance. With many volunteers to give him a hand, Lotfi counted 170 participants, both sponsored and non-sponsored, and among them a good number of female riders, which is usually not the case in riding sports (and many sports).

“We really try to boost female riding, he says spontaneously. There are girls who are very good at it”, such as Giulia Alfeo, who won the longboard dancing open in the female category.

The competition is divided by gender, a choice which makes sense to Lotfi “because otherwise, with three or four times more guys, that would reduce the girls chances to get on the winner’s podium”. The last image of the event was one of a female and a male rider sharing each step of the podium, back together in the end. And it turns out that French riders occupy a good part of winning titles in longboard dancing, becoming the creme de la creme of this discipline.

“Among Docksession members, we are two world champions and three national champions”, he says. The other one holding the world champion title is Aboubakry Sadikh Seck, another French engineer in the Paris area.

“Now, the longboard dancing scene is very European, very French, and very Parisian in particular”, he observes. He still often goes to L.A., where he shot his latest video for Loaded at the beginning of the year. But the pupil seems to have overtaken the master, in a way.

Long live the long board.

(Little bonus video in French below, from an amateur commenting the first longboard dancing competition in Paris while desperately trying to carry off a move successfully)