The rain that’s pouring down now over New York seems to be the only thing to write about. With a note of humor, I promised that there wouldn’t be any weather report on this website. Obviously, in California, there is not much happening on this front, apart from a few extreme events. Plus, weather is rightfully considered the most boring conversation subject we can imagine (yet the one we can hardly escape). Today I surrender. The weather can also be a powerful and poetic source of metaphors. And maybe a sign of the magic ruling up in the sky…

In the case of rainfall, it’s often a sign of sadness. When I left Los Angeles about ten days ago, after Donald Trump was declared winner of the presidential election, it was already raining. A lot. A rare phenomenon that gets people confused in the city of angels, the place where Charles Bukowski wrote :

“It’s hard for me to imagine the people.
maybe they are feeling bad like this,
almost as bad as this.
I wonder what they do when they feel
bad ?
they probably don’t mention it,
they say,
‘look, it’s raining’.
that’s the best way.”

The poem is called “The Weather Report” and that’s always been one of my favorites from Bukowski. It sounds right, in this moment, in the fall of 2016.

The election of Trump obviously has taken its toll on some politically sensitive people, and to be honest I self-identify as such, even if it might sound partisan or pretentious. In my own life, the event literally took a toll, materializing in a weird way.

On November 8th, I was on the road driving from Compton to Santa Ana, covering the elections for the French daily Libération, and suddenly, when the night came with the first results from Florida and Ohio, two crucial states won by Trump, one of my tires got flat. I ended up on a Church parking lot, speaking in spanish with a Mexican-American man who had just voted for the Republican candidate. I had been looking for a person on this political side for quite a few hours… and there I was, with a flat tire to fix, and a latino immigrant happy that Trump was about to win. According to him, abortion was a problem big enough to make the alliance.

A few days later, on another road trip to write a story about pro-Hillary America, my phone broke, the screen in little pieces on the concrete, dead. It’s almost like my car and my phone had feelings too. An extension of my feelings…

Because truly, it was my heart that broke that night. Like the one of many other people I spent the evening with at the Abbey, a bar in West Hollywood, where tears were pouring like the rain.

Days have passed since then, and the popular vote gap between the two candidates keeps increasing, in favor of Hillary Clinton. Her lead surpasses two million votes right now, and it’s getting higher. A petition is circulating on Change.org to “make Hillary Clinton president on December 19”, the day the electoral college electors must cast their vote. It collected 4 666 697 signatures as of today.

Let’s wait and see. Whatever the outcome, it’s a time to notice the multiple acts of solidarity such as the huge march protest in L.A. or this wall in the New York subway where people stuck thousands of meaningful post-its like : “Be the change! (no government oversight required)”. I’ve never seen that kinds of reactions, as far as I remember.

Let’s take as well all the discussions that sparkle with strangers, whether in a shared cab or around a Thanksgiving meal, creating new friendships (sometimes losing some). 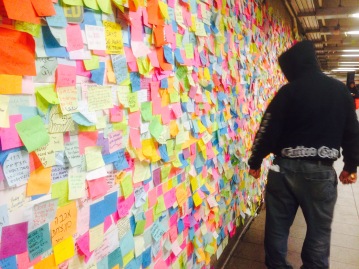 Speaking of Thanksgiving, one thing I wanna thank are the amazing stories told on the Facebook “secret” group Pantsuit Nation.  Its almost 4 million members, of all ages, genders, cities and towns across America, are united by… yup, the love of pantsuits (the outfit adopted a long time ago by Hillary Clinton), but mostly by an inspiring will to personify open-mindedness and not get silenced or intimidated.

At the time I’m writing these lines, here’s the latest post on this page, by Amy S., from Carter, Tennessee : “Hubby and I were in a home improvement store. There was a young black man in front of us who purchased about $30 of stuff. He used his credit card.
Clerk : I’ll need your ID.
Just like that. No please, no apology, no ‘thank you for shopping.’ Nothing.
The young man gave the clerk his ID, paid, and stood near, apparently waiting for the older black gentleman behind us in line. We laid out our stuff, purchasing over $200 in materials. My husband took out his credit card and swiped. Then he looked at the clerk expectantly.
Clerk : *crickets*
Hubby : Don’t you need my ID?
Clerk : No, sir. Thank you.
Hubby : *pointing to the young man who had been ahead of us* But you asked him for his ID, and he bought way less stuff than I did. So… you’re protecting him from credit card fraud but not offering me that same courtesy? Or is there something else going on here?
Young Black Man and I look at each other and share a “ooh, he’s gettin’ it” smile.
Clerk : *having the good sense to at least blush* May I see your ID, sir?
Hubby : *handing over his ID* That’s more like it! And I ‘d like you to be polite and call the man behind me ‘sir’ too.
The man behind us muttered ‘Thank you’. And my hubby got a smile and a fist bump on our way out.
Point is, be aware of not only the aggressions, but also the micro-aggressions. And speak out ! We win the little battles.”

This sounds right as much as Bukowski’s poem : the little battles.