A new form of resistance is boiling in the latino community of Boyle Heights. This blue-collar neighborhood located just east of Downtown Los Angeles has been attracting art galleries, along with real estate investors, for the past couple of years. But what is happening here, like in lots of Western urban areas such as New York, Washington DC, London, Paris or Berlin, suddenly finds frontal opposition.

During the latest protests, activists carried banners that said “Boyle Heights No Somos Beverly Hills”, “No Mas Desalojos” (no more evictions), “El barrio no se Vende”, “Gentrification is Racism” or is “Urban Colonialism”, “California not only for the rich”, etc. All very explicit signs against an economic and social global phenomenon which has very concrete local consequences, that some say are inevitable. But not everyone.

“We simply don’t want them here, what they’re doing is ‘art-washing’, says Angel, a young resident in his twenties, born and raised in Boyle Heights and spokesperson for the movement Defend Boyle Heights. We have nothing against art – we play music in our backyards, we do art – but they use art as a way to come in a cheap neighborhood where they invest in buildings, build high-end condos, cafés, etc. It’s like a Trojan horse”. 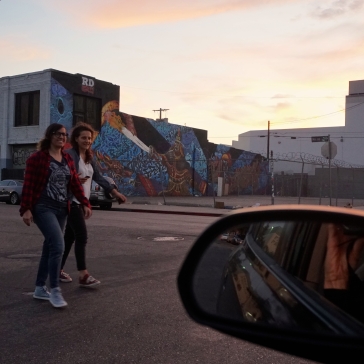 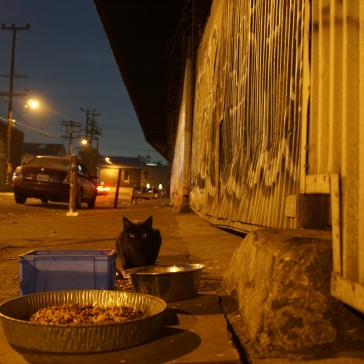 Angel sees two major consequences of this ‘art-washing’ machine that Defend Boyle Heights, who will celebrate its first year of existence this month,  intends to fight. “There’s the economic aspect, where we see people being displaced, kicked out by landlords who suddenly can rise their rents, and the cultural one, because this movement is conducted by rich white people”. So in the end, to put it simply, he doesn’t want wealthy white arty people to replace working families of immigrants.

It’s class warfare meets race clash. “It’s a very economically violent thing”, says Angel, who’s ready to do whatever it takes to defend his community and for that reason, prefers not to reveal too much about his identity. The LAPD might actually be after him. Indeed, the police is investigating different acts of vandalism perpetrated last month that could be classified as “hate crimes”. A “white art” graffiti was painted on the iron curtain of the recently opened gallery Nicodim, which is owned by an art dealer from Romania.

Angel denies being racist though. And his movement rejects the accusation of “hate crime”, at least not perpetrated by them. “Gentrification is the real hate crime!”, they wrote in response on their Facebook page. “You seriously think you’re gonna push out a bunch of raza from the hood and think we’re just going to take it without pushing back !? Gallery owners calling the cops on community members to start a ‘hate crime’ investigation is as classist and as racist as it can get especially when the whole community in Boyle Heights is up against displacement, evictions, and police brutality”. In other words, this kind of graffiti would be, in Angel’s eyes, considered self-defense, at most.

Plus, Angel stresses that these galleries opening everywhere – a dozen of them – “are not little independent galleries. They’re tied to major rich galleries and art institutions”. He mentions the examples of Beverly Hills based United Talent Agency, who opened an art space in september on South Anderson Street, starting with a Larry Clark exhibit. This opening spurred a protest where local residents asked the gallery to leave.

“Boyle Heights is becoming the Williamsburg of L.A.”, says Diego, a 28 year-old street artist native of the neighborhood. Diego has been hired a couple of years ago by an ad agency based in Williamsburg, which opened a warehouse in the L.A. Arts District, separated from Boyle Heights by the L.A. river. Williamsburg, the neighborhood of Brooklyn which gentrified about ten years ago, internationally embodies hipsters habitat today.

Of Mexican-Italian origins, Diego feels torn about the subject of gentrification, which along the way brought him a good paying job. “It used to be gang members fighting for the territory, and now it’s hipsters”. He suspects that this last category, with the power of money it has, will win the fight easily.

But Angel, whose parents emigrated from Mexico, don’t intend to let that happen. “We protest and let them know we want them out of here. We’re not here to negotiate. I think it can work”, he says.

Defend Boyle Heights is having a public meeting after the election where they will discuss the issue. “This is really kind of beginning, we’re gaining attention”, Angel believes, saying that the group attracts “a mix of different people, students, mothers, young and old, artists…” . He is also happy to see people rise against gentrification in other cities, “like Austin”. Indeed, I checked and there were such protests in Austin, as well as in Brooklyn, Berlin, even Utrecht, Netherlands. So it may be the start of a new international cause. Hopefully spoken in Spanish, for a change (not sure Dutch would help).